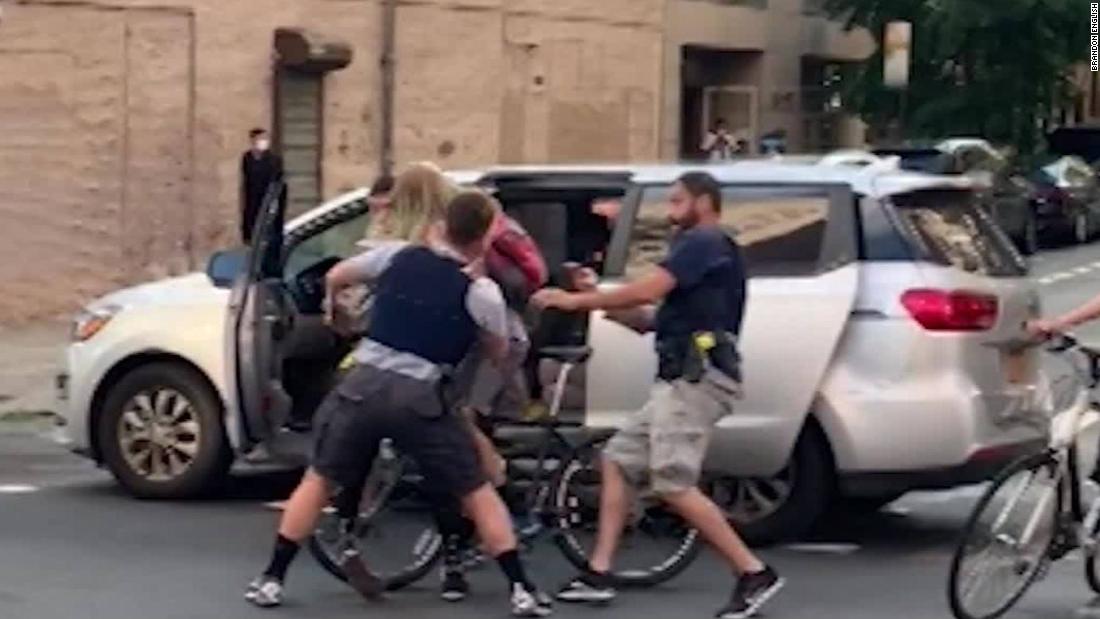 The video shows a woman, identified by the NYPD as 18-year-old Nicholas Stone, fighting while being held by officers and then put into an unmarked gray van. Officers on bicycles appear to be blocking groups of people on the spot.

In a series of tweets, the NYPD said Stone was “wanted for damage to police cameras during 5 separate criminal incidents in and around Park City Hall.”

When officers from the NYPD Mandate Squadron took custody of Stone, they were “attacked with rocks and bottles,” the department said.

The NYPD Warrant Squad uses unmarked vehicles to identify suspects, and officers on bicycles wearing bright yellow and blue uniform shirts were there to help make the arrest, the NYPD said.

CNN has failed to reach Stone and it is still unclear who its legal representatives are.

New York City Mayor Bill de Blasio said it was “the wrong time and the wrong place,” to stop the woman. The mayor was commenting Wednesday after a reporter asked him about the video.

He went on to say that New York City is not Portland, Oregon, and that the NYPD are not federal agents. Portland has been the scene of ongoing protests that began largely after the assassination of George Floyd and continued after President Donald Trump sent in federal forces around the July 4 holiday with the purpose of protecting federal property.

De Blasio also said what happened was “disturbing” and not the kind of thing he wants to see in the city.

“It is the responsibility of the police, if someone commits a crime response, it needs to be followed up. Given the atmosphere in the country and the real concerns that people have, it should not be in the middle of an ongoing protest, “de Blasio said.

The mayor will talk to the NYPD commissioner today about the incident because he thinks there was a better way to do it, he said.

The New York Civil Complaints Review Board received a complaint about an incident involving a protest being taken over a police van on Tuesday and will be investigated, board spokesman Ethan Teicher said.